Shroud of Turin Unveiled for Youth in Documentary

Pope at Chrism Mass: A Good Priest Makes Christ Present to His People

Looking to the cross means to challenge and question oneself about one’s actions and choices, the Holy Father said.

VATICAN CITY — Jesus was the first target of “fake news” spread by those who wanted to spin and twist his message for their own benefit, Pope Francis said Palm Sunday, but stressed that despite the pride and skepticism of some, nothing can dampen the joy of Christ’s message or his resurrection.

On the cross, Jesus died “crying out his love for each of us: young and old, saints and sinners, the people of his times and of our own,” the Pope said March 25.

“We have been saved by his cross,” and despite the coldness and skepticism of some, “no one can repress the joy of the Gospel; no one, in any situation whatsoever, is far from the Father’s merciful gaze.”

Pope Francis spoke to pilgrims present for his Palm Sunday Mass in St. Peter’s Square. He began the liturgy at the obelisk in the center of the square, where he blessed the palms and olives to be used in the celebration. He then processed to the main altar and began Mass. 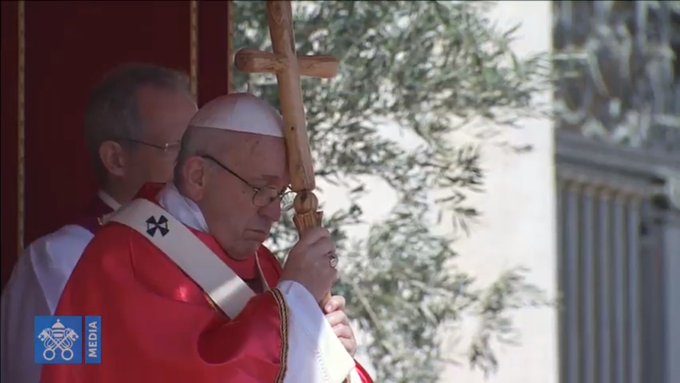 Palm Sunday also coincided with the diocesan celebration of World Youth Day, which this year holds the theme “Do Not Be Afraid, Mary, for You Have Found Favor With God.”

It also marked the end of the March 19-24 pre-synodal meeting in Rome, which gathered some 300 youth from around the world and drew participation from an additional 15,000 young people on social media. The event served as a precursor for the October Synod of Bishops on “Young People, Faith and the Discernment of Vocation.”

At the end of Sunday’s liturgy, young people presented Pope Francis with their conclusions, which were compiled into a 16-page final document based on discussions held throughout the week.

In his homily, Pope Francis said the account of Jesus’ entrance into Jerusalem evokes a range of different and at times contradictory sentiments, including love and hatred, self-sacrifice and indifference; the joy of those who welcome Jesus and the bitterness of those who want him crucified.

The sense of love and joy conveyed in the passage is reminiscent of all those “living on the edges” of society or who have been “left behind and overlooked,” but who have also been touched, healed or forgiven by God in some way.

In contrast, this joy, Francis said, is a source of “scandal” for those who consider themselves faithful to the law and its precepts, and it is “unbearable for those hardened against pain, suffering and misery.”

The cry of those who shout “Crucify him!” the Pope said, is the voice “armed with disparagement, slander and false witness. It is the voice of those who twist reality and invent stories for their own benefit, without concern for the good name of others.”

Francis said people with this attitude have no problem “spinning facts” and making Jesus look like a criminal. As a result, “hope is demolished; dreams are killed; joy is suppressed. The heart is shielded, and charity grows cold.”

However, when faced people who have this attitude, the best remedy, the Pope said, “is to look at Christ’s cross and let ourselves be challenged by his final cry,” which Jesus made as he died for each and every person.

Looking to the cross means to challenge and question oneself about one’s actions and choices, including the sensitivity to those who are experiencing difficulty, the Pope said, asking: “Where is our heart focused? Does Jesus Christ continue to be a source of joy and praise in our heart, or does its priorities and concerns make us ashamed to look at sinners, the least and forgotten?”

Speaking directly to the young people present, Pope Francis said that like the Pharisees who told Jesus to “rebuke your disciples,” there are also people who try to silence and exclude youth.

However, pointing to Jesus’ response that “if these were silent, the very stones would cry out,” Francis told youth not to give into the pressure to stay quiet, because “you have it in you to shout.”

After Mass Pope Francis led pilgrims in praying the Angelus, asking that Mary would help each person to live Holy Week well. “From her we learn the interior silence, the gaze of the heart and loving faith to follow Jesus on the path of the cross, which leads to the joyful light of the Resurrection.”

Pope at Mass: Trust in God makes us free